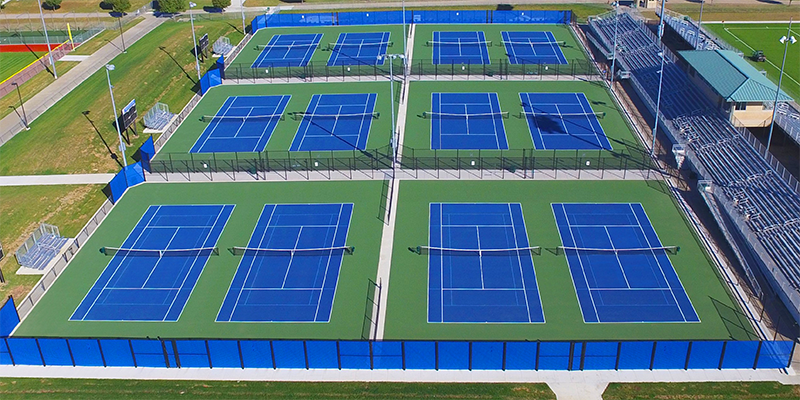 MAC Earns a Bronze Award for Transforming a Soccer Field into a Top Quality, Hard-Court Tennis Facility in Olathe, Kansas

The Tennis Industry/American Sports Builders Association’s Distinguished Facility of the Year Bronze Award goes to the College Boulevard Activity Center (CBAC) in Olathe, Kansas on which McConnell and Associates was the specialty contractor. The annual awards go to the nation’s most outstanding examples of hard-court construction for tennis court surfaces. This year’s winners are located across the country from California to New Hampshire and featured in the May 2017 edition of Tennis Industry.

Adapting to the Challenges Existing Features Presented
McConnell and Associates was chosen to be the tennis court project’s specialty contractor upon winning a public bid. The project’s general scope included removing the existing grass soccer field at the CBAC and building a 12-court tennis court complex. A sidewalk on three sides that was to remain, along with the existing grandstand bleachers on the fourth side limited the amount of extra space with which we had to work. Throughout the demolition to sod phases, the MAC team had to be cognizant of the surrounding complex still in-use by the district students’ and the existing utilities in place.

Limited space and keeping the facility available for use throughout construction weren’t the only challenges MAC faced on this award-winning tennis court project. Value engineering came into play when our team recommended that increasing the size of the fence posts with the wind slats and decreasing the size of the posts that would not be receiving the wind slats on the interior fence would result in a $3,000 savings for the school district.

Adapting the existing irrigation to the new tennis courts’ irrigation system demanded zone reconfigurations. The soccer field’s original zones were extensive, so our team consolidated them to create two small zones that were needed for the viewing berms, while keeping the entire system up and running in the complex’s other areas.

MAC project manager, Mike Mehaffey says, “The limited workspace was the most challenging. One minor issue we ran into was figuring out a way to get all of the drainage installed on the east edge where the existing bleachers were in place along with the new light poles locations. A lot of moving parts and pieces in a small space needed to be accounted for and dealt with accordingly to maximize existing features with the new ones.”

Turning a Soccer Field into a Tennis Court Complex is Award Worthy
Transforming a natural grass field that drains naturally through the soil into nearly 100,000 sq. ft. of concrete pavement that creates water runoff when it rains is no small feat. Between drainage differences of hard-court tennis court surfaces versus soccer fields and the other new tennis court complexes’ features that were installed within the confines of the existing field’s space, MAC delivered a project that caught the attention of the Tennis Industry/American Sports Builders Association and earned a bronze award. More importantly, the community and Olathe Public Schools now have a top quality hard-court tennis facility worthy of hosting the state championship.

Mehaffey explains, “Whether it’s a tennis court or any kind of sports court for our clients, if there are any extra steps we can take to create a better quality product, we take them. Today, it’s so common for other sports court contractors to eliminate steps or decrease essential material to make their project bids cheaper just to get the job. For example, a lot of tennis court builders are not installing encapsulated hardware in their concrete, which increases the risk of corrosion. Sure, including this hardware is a minor upcharge on a project. However, MAC’s bids figure it in on every job to eliminate a significant corrosion issue down the road.”

Same Expertise, Different Projects, Different Challenges
Even though our team has been on projects like the CABC every day since 1965, each project is different and every day brings different challenges. Some days it’s a bid to recoat a single residential tennis court surface or refurbish a running track, and others are tackling challenges on a new 12-court tennis facility. Regardless of the project or scope, and the challenges they bring, having the experience MAC’s team has gained over the decades means nothing happens that we can’t solve with ingenuity and sometimes award-winning results.